EVENING EVENTS SUCH AS LADIES NIGHTS, SENIOR RIFLE, JUNIOR RIFLE AND PISTOL, AND SENIOR PISTOL ARE BEING LEFT TO THE DISCRETION OF THE RESPECTIVE EVENT DIRECTORS.  I ENCOURAGE THE DIRECTORS TO USE GOOD JUDGMENT IN DECIDING TO EITHER HAVE OR CANCEL THEIR EVENTS.

MATCHES SHOULD BE CANCELLED PURSUANT TO THE GOVERNORS ORDER.

THE CLUB REMAINS OPEN FOR INDIVIDUAL MEMBERS TO COME OUT AND SHOOT.
as always thanks

The Oak Harbor Conservation Club is a private club whose goals include promoting harmony between sportsmen and landowners; to encourage the teaching of constructive conservation in our schools; to propagate and preserve wildlife and fish and to aid in the restoration of proper habitat for them, to promote the wise use, conservation, and restoration of our natural resources in all forms.

Handgun safety, use, and competition

Beginning with basic handgun safety and use, the program progresses from basic pistol marksmanship to advanced skill and competition in precision pistol. Club members have competed on local, state, and national levels winning competition medals for individual shooters and team trophies. The program meets weekly on Wednesday evenings 6:00 p.m. The program is free and open to the public. For information about participating contact John Brikmanis at brikmanis@cros.net or call (419) 898-0000.

The program teaches fundamentals of rifle shooting. Youth can learn how to safely use rifles the family has at home or can learn on rifles provided by the club. Various types of rifle shooting are taught from sporter fun type matches, to precision smallbore (.22 rimfire) competition shooting, to precision highpower rifle competition shooting. Program participants have competed in local, state, and national matches winning individual medal in smallbore competition and highpower matches at the National Rifle and Pistol Matches at Camp Perry. The program is free and open to the public and taught by NRA Certified instructors and Range Safety Officers. The program meets weekly from 6:00 p.m. until 7:00 p.m. For information about participating contact Richard Rudes at highpowershooter@yahoo.com or call (419) 732-3000.

Ladies Only Self Defense Program

The program is free and open to the public. It meets on the First and Third Mondays each month at the Oak Harbor Conservation Club, beginning at 5:00 p.m. Designed for women of all ages 10 to 90. Consists of both armed and unarmed self-defense. Firearms can be provided for the shooting part of the class. No prior training required. For more information or to register, email Terry Rudes at trudes@cros.net or call (419) 732-3000.

Held at the Oak Harbor Conservation Club Saturdays beginning January 12 and running through March. This is a free program open to the public. All materials and instruction are included. There is a limited number of seats. To participate you have to contact Gene Baker at (419) 559-8823.

NOTICE TO ALL MEMBERS

All of those who are interested in getting an electronic key fob, ($20) to the clubhouse and/or to be checked out for the use of the range(s), come to the Gordon Road Clubhouse the last Monday of the month ( unless it is a holiday) at 7:00 P.M. Check the monthly newsletter for dates. Bring your membership card, your own eye & hearing protection, firearm(s) and your own ammunition. If you need a replacement fob the charge is now $20. If you have any questions call John Duncan at (419) 898-9199.

2nd annual Fish Fry a Success, THANKS to all that helped, ate and had fun. 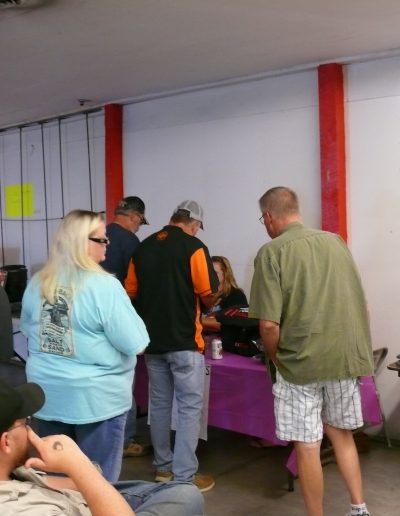 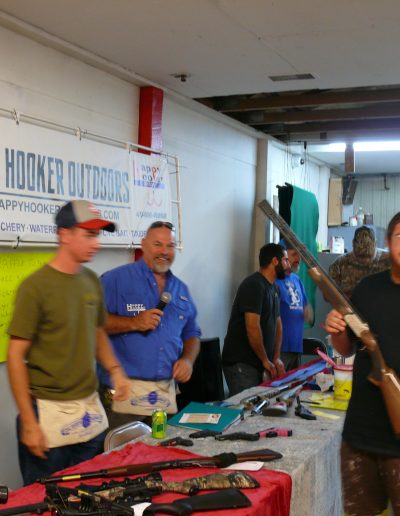 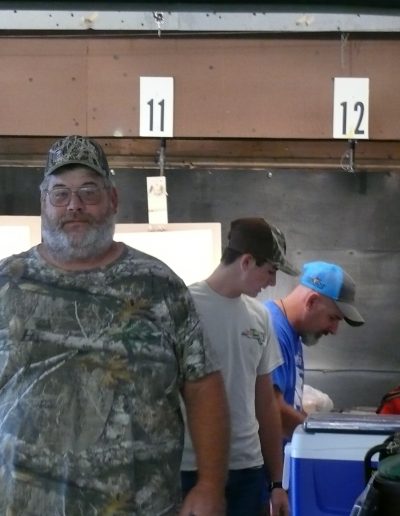 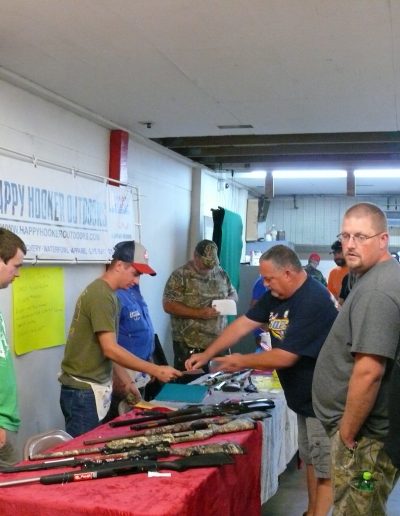 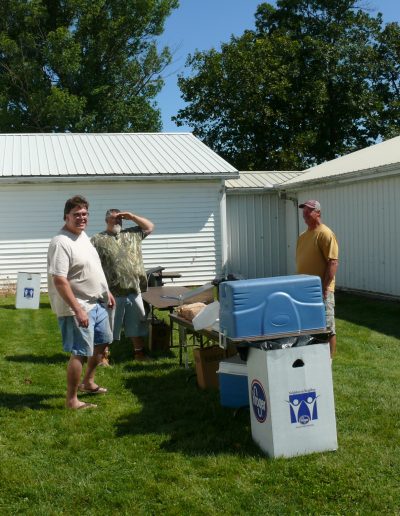 Getting set up to cook 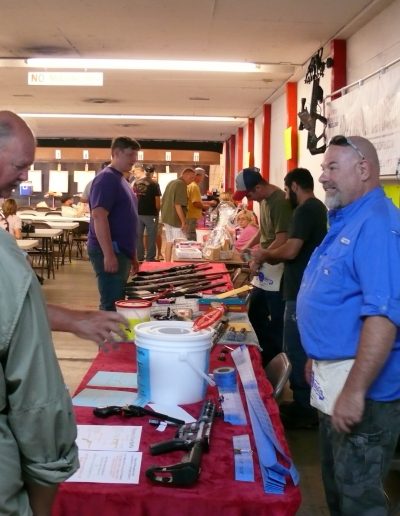 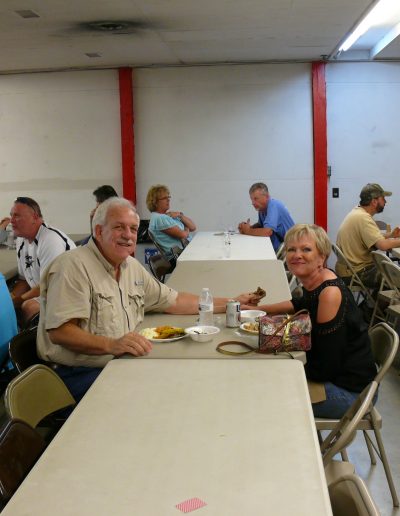 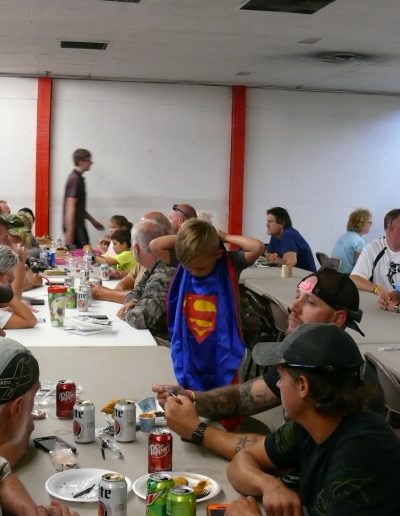 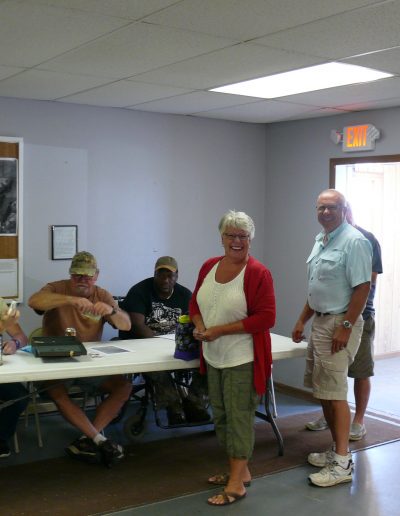 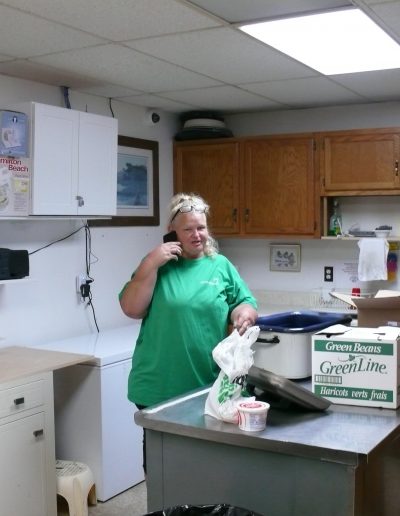 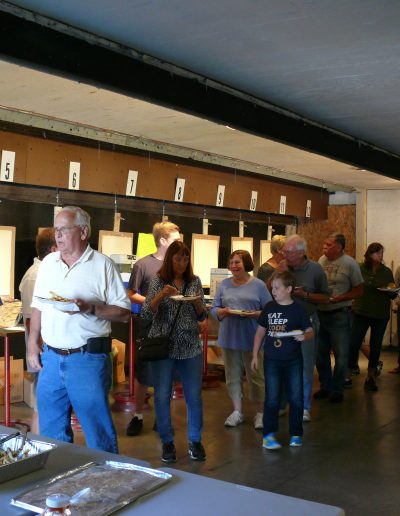 Anyone having anything other than below for the meeting, please get it to me ASAP.

For the June 8 meeting, we are again NOT going to have a membership meeting. The trustees will meet at the regular time. The previously scheduled duck blind drawing will not be held on June 8, but will be held at the work party on Saturday June 13.

Agenda items
Item 1. Attached Range Rules proposed changes. – The primary changes are to include the violation policy that has been used as long as I can remember. The purpose is to have the policy in writing so the membership knows what the procedure is.

Item 2: Darr Rules proposed changes. The major change there is that decoys have to be picked up and put away at the end of each hunting day. Also the prohibition of lead shot was changed to require that shot used comply with state and federal law and regulations. Still not lead for waterfowl, but can use lead for upland game, unless there is a regulation prohibiting it.

Item 3: Constitutional amendment moving membership reqirements from the constitution to the bylaws. This will make them more flexable. A list of the changes are at the end of the attachment. Junior membership is eliminated. Authorization for trustees to allow memberships as prizes for club events. Read through them.

Additional discussion on Club Express. Survey shows many members would like to renew on line.

A recent investigative report by Cleveland.com suggests the leader of an Ohio organization may be running a fundraising scam, asking for donations purportedly to help pass pro-gun laws, then funneling the money to an out-of-state, for-profit business and pocketing the money along with family members.

According to Cleveland.com, Chris Dorr, Executive Director of Ohio Gun Owners, and his brothers, Ben and Aaron, have set up “what amounts to a family business” in multiple states, including Ohio, Iowa, Minnesota, Missouri, Idaho, Tennessee, Virginia, New Hampshire, Wisconsin, and Georgia. They have also set up a national organization called American Firearms Coalition.

The formula appears to be identical across all of these organizations: use Facebook videos to attack pro-gun lawmakers and gun rights organizations, then ask for money. They also oppose pro-gun legislation, then take credit for other people’s work when the legislation passes.

Iowa seems to be ground zero for the Dorr “franchise.”

Iowa state Rep. Matt Windschitl, who shepherded through a 2017 bill that created a Stand Your Ground law and allowed Iowans to sue local governments for creating gun-free zones, said Iowa Gun Owners first opposed the bill — in the form of continuous fundraising emails to their members — but weren’t actively involved in talks. They then took credit for its passage, he said, prompting him to call out the group on the floor of the Iowa House as a “scam.”

“They are not motivated by a genuine appetite for advancement of Second Amendment virtues,” said Windschitl, a trained gunsmith. “They are there to stir the pot and make as much animosity as they can, and then raise money off that animosity.”

“I’m all for advocacy,” said Minnesota state Rep. Jim Nash, a leading pro-gun Republican in Minnesota. “But the best advocacy groups go in with the end goal in mind of the legislative outcome they want, not just their personal wealth increasing. And that one you can quote me on exactly.”

How do the Dorrs compensate themselves with donations from gun owners? The investigation looked at official IRS tax records and reached some shocking conclusions:

When it comes to that, their tax filings are opaque, which their critics, including an anonymously run Facebook account called “The Truth About Iowa Gun Owners,” frequently point out.

The IRS requires nonprofit organizations to disclose compensation paid to their top employees. But the various Dorr groups for which tax filings are available report paying their employees zero compensation.

But none were paid, according to their tax filings.

When questioned by critics in the past about their compensation, Ben Dorr on social media has pointed to management fees reported elsewhere in their filings and a company called Midwest Freedom Enterprises. Tax filings for Iowa Gun Owners say the firm performs all its management functions. They also say from 2015 to 2017, IGO spent $205,362 on management.

There is scant mention of Midwest Freedom Enterprises on the Internet, but the company appears to be connected to the Dorrs. The firm previously was registered to a West Des Moines address also used by Iowa Gun Owners. A review published for Labrinth Inc., a company that helps people with paperwork for nonprofit organizations, identifies Aaron Dorr as Midwest Freedom Enterprise’s director of marketing. Iowa campaign finance filings show the company has performed paid political work like advertising and direct mail.

Cleveland.com asked Scott Hubay, an Ohio attorney who specializes in campaign finance law, to review the filings for the Minnesota, Iowa and Ohio chapters. He said the combination of the Minnesota chapter’s high fundraising expenses, the management fees paid by the Iowa and Minnesota chapters to a Dorr-tied political firm and the lack of disclosure about employee compensation raises questions about how the Dorr groups spend their money in general.

“It seems to me like what they’re doing is using them just to drum up business to themselves,” he said. (emphasis added)

How much money are Ohio Gun Owners and the Dorr brothers’ other state frachises bringing in through the front door then moving out the back door to their for-profit business? Cleveland.com‘s analysis indicates it’s a lot, as this example from the report suggests:

In its most recent three years, public tax filings show Minnesota Gun Rights — the only Dorr-run group that has disclosed fundraising expenses — reported spending $601,221, of which 90% was spent on fundraising.

In the nonprofit world, a figure of 90% spent on fundraising is extreme. According to well-established industry standards, the bulk of donor dollars should be spent on programs, not on overhead or fundraising.

The Better Business Bureau’s standards, published in 2003 by the BBB Wise Giving Alliance, recommend that at least 65 percent of the nonprofit’s total expenses should be for program expenses. The nonprofit’s total expenses should not include more than 35 percent for fundraising. Charity Navigator sets a goal of “less than 10 percent” of the nonprofit’s budget for fundraising spending and considers an organization that spends less than one-third of its budget on program expense to be failing in its mission.

When Ohio Gun Owners set up shop in Ohio, we expressed our concerns, noting that it is not here to help. We stand by that original assessment.

Most Ohio lawmakers say they’ve never met Chris Dorr and that he spends no more time in the Statehouse than it takes to make yet another Facebook video filled with conspiracy theories and fear-mongering, always followed by an impassioned plea for more money.

Indeed, in yet another fundraising video posted just this week, Dorr admitted:

“I’ve not had any great length conversations with Speaker Householder.”

Representative Larry Householder (R) is Speaker of the House and Chairman of the Legislative Service Commission, the very person who sets the state’s legislative agenda and who oversees the agency that provides the Ohio General Assembly with drafting, research, budget and fiscal analysis, for all legislation.

Facebook and Facebook videos are free. And online tools to send mass emails are relatively cheap. Direct mail is expensive, but the Dorrs’ direct mail appears to be focused on asking for donations, not gun rights advocacy.

So where is the money going?

According to this investigation, the answer now seems to be clear.

Threats and bad behavior do NOT advance gun rights

“Ohio Gun Owners” is not here to help